How Affordable is Property for Loughborough’s Average Working Families?

on February 01, 2019
The simple fact is we are not building enough properties. If the supply of new properties is limited and demand continues to soar with heightened divorce rates, where one household becomes two; people living longer; and continued immigration; this means the values of those existing properties continues to remain high and out of reach for a lot of people, especially the blue collar working families of Loughborough.

Looking at some recent statistics released by the Government, the ratio of the lower quartile house prices to lower quartile gross annual salaries in Charnwood Borough Council has hit 8.49 to 1. What does that mean exactly and why does it matter to Loughborough landlords and homeowners?

If we ordered every property in the Charnwood Borough Council area by the value of those properties, the average value of the lower quartile properties (i.e. lowest 25%) would be £155,000. If we then did the same, and ordered everyone’s salary in the same council area then the average of the lowest quartile (lowest 25%), of salaries would be £18,255 per annum. Thus dividing one with the other, we get the ratio of 8.49 to 1.

Assuming there is one wage earner in the house, the chances of a Loughborough working family being able to afford to buy their own home, when it’s over eight times their annual salary, is very slim indeed. The existing affordability crisis of people wanting to buy their own home is the unavoidable outcome of the decade on decade failure to build enough homes to keep up with demand. Nevertheless, improving affordability is not a case of just constructing more homes. Charnwood Borough Council needs to ensure more properties are not only built, but built in the right locations and of the right type and at the right price to ensure the needs of these lower income working families are met, because at the moment, they presently have few options apart from the private rental sector.

Looking at the historic nature of the ratio, it can clearly be seen in the graph below that this has been an issue since the early to mid 2000’s. 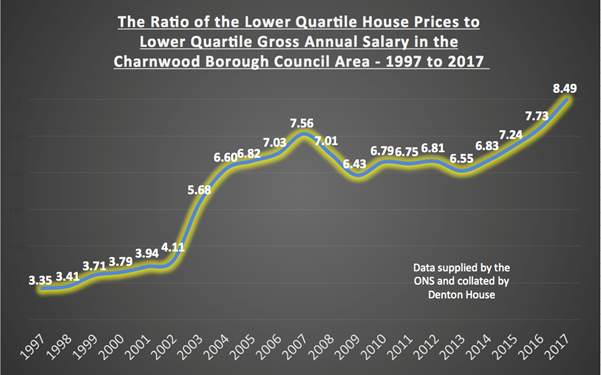 However, if one looks at the historic data, those on the bottom rung of the ladder (those in the lower quartile of wage earners) used to be housed by the local authority instead of buying. However, the vast majority of council houses were sold off in the 1980’s, meaning there are much fewer council houses today to house this generation.

Many of the lower quartile working class families were given a lifeline to buy their own homes in the middle 2000’s, with 100% mortgages, but with the credit crunch in 2009 that rug (of 100% mortgages) was rudely pulled from under their feet. You see it is cheaper to buy than rent, however it’s the finding of the 5% deposit that is the challenging issue for these Loughborough working class families. So unless the Government allow 100% mortgages again, the fact is, demand for rental properties will outstrip supply. But there is some hope, as Lloyds have this week just launched their 100 per cent Lend a Hand mortage for first time buyers.

In the long term, to alleviate that, I would suggest the Loughborough community hold their local politicians at Charnwood Borough Council to account for the actions they could take to ensure the affordability of housing and the extent to which they work with private developers or housing associations, and aggressively use the planning tools at their disposal to safeguard the local community getting the new households that we need. Charnwood Borough Council could make certain parcels of residential building land for private rented development only, eliminating the opportunity of the land being bought to develop large executive homes, which do not solve the current problem.

Yet, in the short term, all this means is demand for rental properties will continue to grow, keeping Loughborough house prices high and Loughborough rents high.

If you are interested in talking about this or would like a second opinion on any properties you have seen,please feel free to call me on 01509 260777 or email me.