According to the Land Registry's latest House Price Index for Loughborough and the surrounding locality, the value of apartments/flats are rising at a faster rate than terraced/town houses and semi-detached properties.


This moderately increasing rate of property value growth is opportune – but no one should confuse it with a strong and vigorous healthy Loughborough property market. Instead, it is somewhat an indicator of the long-lasting lack of property on the market. In fact, I have spoken about the lack of homes for sale in Loughborough on a number of occasions in my Loughborough Property Blog and whilst it isn’t as bad as it was 12 months ago – choice is quite limited for buyers.

The average property value in Loughborough 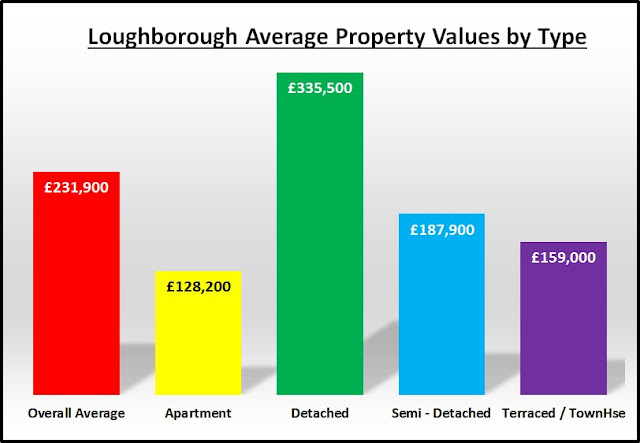 When split down into property types ..


So why have Loughborough apartments performed better, and is it just a Loughborough thing? When I scrutinised the figures for the rest of the UK, it appears that apartments are pacemakers in the clear majority of the country. Of the 379 local authority areas in the UK, the value of apartments is rising faster than detached, semi-detached and terraced houses in 320 of them.

So, should Loughborough apartment owners be getting out the Champagne? Well, I would keep it on ice as the Land Registry figures are notorious for short term fluctuations. It’s hard to have faith in the fact that Loughborough house values rose rapidly last month given that, in the last six months, the Land Registry has frequently made downward revisions to their first published House Price Index figures.


Thankfully, the bigger picture from the Council of Mortgage Lenders (CML) stated that home buying activity last month was up 2% over the same month in 2016 – not bad as we have had the Autumn, Winter and now Spring since Brexit. The CML stated first time buyer’s levels of affordability was being squeezed and that the average amount borrowed by those first-time buyers dropped slightly last month, but the overall amount borrowed (by all buyers) was an impressive 12% higher than the same month in 2016.

So, what next for the Loughborough Property market? I believe the uplift in the values of apartments is a short-term blip. The real issue is with the way wage growth might not keep up with inflation as the effects of 2016 exchange rate sucks in inflation (meaning real wage growth stagnates). This will mean buyer demand growth will be curtailed and with property values already so full, I believe a renewed hastening in house price growth is unlikely.

I believe we are starting to return to the housing market we saw in the mid 1990’s, Steady demand, steady supply – nothing silly when it comes to house price growth. Therefore, I believe, with what is happening around us – this isn’t a bad thing at all. HMS Loughborough Property Market…. “Nice and steady as she goes”, says the Captain