Should the 5,966 home owning OAP’s of Loughborough be forced to downsize?

This was a question posed to me on social media a few weeks ago, after my article about our mature members of Loughborough society and the fact many retirees feel trapped in their homes. After working hard for many years and buying a home for themselves and their family, the children have subsequently flown the nest and now they are left to rattle round in a big house. Many feel trapped in their big homes (hence I dubbed these Loughborough home owning mature members of our society, ‘Generation Trapped’).
So, should we force OAP Loughborough homeowners to downsize?

Well in the original article, I suggested that we as a society should encourage, through building, tax breaks and social acceptance that it’s a good thing to downsize. But should the Government force OAP’s?

Well, one of the biggest reasons OAP’s move home is health (or lack of it). Looking at the statistics for Loughborough, of the 5,966 Homeowners who are 65 years and older, whilst 3,226 of them described themselves in good or very good health, a sizeable 2,029 home owning OAPs described themselves as in fair health and 711 in bad or very bad health.

11.92% of Loughborough home owning OAP’s are in poor health 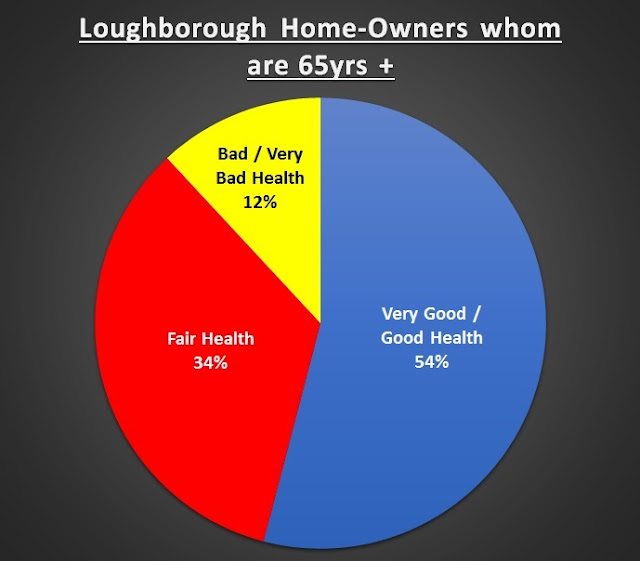 But if you look at the figures for the whole of Charnwood Borough Council (not just Loughborough), there are only 362 specialist retirement homes that one could buy (if they were in fact for sale) and 764 homes available to rent from the Council and other specialist providers (again- you would be waiting for dead man’s shoes to get your foot in the door) and many older homeowners wouldn’t feel comfortable with the idea of renting a retirement property after enjoying the security of owning their own home for most of their adult lives.

My intuition tells me the majority ‘would be’ Loughborough downsizers could certainly afford to move but are staying put in bigger family homes because they can't find a suitable smaller property. The fact is there simply aren’t enough bungalows for the healthy older members of the Loughborough population and specialist retirement properties for the ones who aren’t in such good health ... we need to build more appropriate houses in Loughborough.

The Government's Housing White Paper, published a few weeks ago, could have solved so many problems with the UK housing market, including the issue of homing our aging population. Instead, it ended up feeling annoyingly ambiguous. Forcing our older generation to move with such measures as a punitive taxation (say a tax on wasted bedrooms for people who are retired) would be the wrong thing to do. Instead of the stick – maybe the Government could use the carrot tactics and offered tax breaks for downsizers. Who knows – but something has to happen?

.. and come to think about it, isn’t the word ‘downsize’ such an awful word? I prefer to use the word ‘decent-size’ instead of ‘down-size’- as the other phrase feels like they are lowering themselves, as though they are having to downgrade themselves in their retirement (and let’s be frank – no one likes to be downgraded).

The simple fact is we are living longer as a population and constantly growing with increased birth rates and immigration. So, what I would say to all the homeowners and property owning public of Loughborough is ... more houses and apartments need to be built in the Loughborough area, especially more specialist retirement properties and bungalows. The Government had a golden opportunity with the White Paper – and were sadly found lacking.

And a message to my Loughborough property investor readers whilst this issue gets sorted in the coming decade(s) – maybe seriously consider doing up older bungalows – people will pay handsomely for them – be they for sale or even rent? Just a thought!