While Brexit has not yet had a sizeable impact on the Loughborough housing market, my analysis is pointing to the fact that the economic viewpoint still remains uncertain and Loughborough property price growth is likely to be more subdued in 2017 - although that isn’t a bad thing so let me explain.

Since the summer, apart from a little wobble of uncertainty a few weeks after the Referendum vote, property values (and the economy), on the whole has outperformed what most people were anticipating. In fact, when I looked at the property prices for our Charnwood Borough Council area, these were the results... 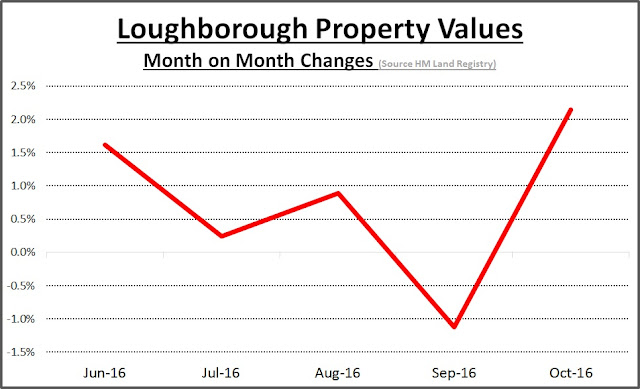 The UK property market continues to perform robustly (because we can’t just look at Loughborough as if in its own little bubble) with annual price growth set to end this year at 6.91% and most East Midlands region property market at 7.52%.

Talking to fellow agents in London, the significant tidal wave of growth seen from 2013 through to 2015 in the capital has subdued over the last six months. However, as that central London house price wave has started to ripple out, agents are starting to see stronger property growth values in East Anglia and the South East regions outside of London, than what is being seen within the M25. So, fellow Loughborough landlords and homeowners, is this the time to get your surfboards ready for the London wave?

Well, we in Loughborough haven’t really been affected by what is happening in the central London property mega bubble (i.e. Kensington, Chelsea, Marylebone, Mayfair etc.). The property market locally is more driven by sentiment, especially the ‘C’ word ... confidence. The main forces for a weaker Loughborough Property market relate to economic uncertainty surrounding the Brexit process, which I believe will impact unhelpfully on consumer confidence in the run up to and just after the serving of the Section 50 Notice by the end of Q1 2017.

In addition, the influence of reforms to the taxation of landlords is expected to result in a reduced demand from buy to let landlords, which will limit upward pressure on property values. However, on the other side of the coin, demand from tenants has been strong, but this has been counterbalanced by a strong supply of rental properties. In my opinion, there is a slight risk of rents not growing as much in 2017 as they have in 2016, but by 2018 they will rise again to counteract Philip Hammond’s changes to tenant fees.

The broader Loughborough rental market looks relatively positive with modest rental growth expected and rents might rise further if landlords begin to sell properties in an effort to offset to the impact of tax rises.

But these predictions do not take into account any effect of a possible snap General Election or further referendum on ratifying any Brexit deal (if that comes to pass in the future).